Get Accepted? Now Learn How to Save for College

Learning how to save for college can help keep it affordable. 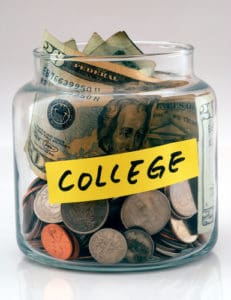 If you want to make getting your education as affordable as possible, you’ll need to learn how to save for college. College can be expensive, but luckily there are many ways to find potential savings. Below is a list of a few useful money-saving strategies you can take advantage of right now.

If you want to find the most ways to save money, you’ll need to do some research. For example, if you enjoy working out in a gym, you might be able to avoid paying for a gym membership while in school, but only if your school has a comparable gym on campus that you can use for free or at a cost that’s less than your off-campus alternative. Or maybe you want to cut the cord and avoid paying for cable or satellite television. But you’ll need to figure out how much it costs and compare that to a television alternative you may use, like Netflix.

For those living on campus, this might be a moot point, because you’ll probably have to live with a roommate. But if you live off campus, you’ll have the option of living with someone else. Having a roommate can significantly lower the cost of an apartment. Instead of paying $900 per month for a one bedroom, you and a roommate can each pay $600 per month for a two bedroom apartment that costs $1,200. A roommate also means you can share expensive appliances, like a television or refrigerator.

New books are nice but usually are not worth the added $20-$50 (or more) per book. Buying used instead of new textbooks can quickly add up to cost savings of several hundred dollars each semester.

Whether you’re in a dorm or your own apartment, you’ll need a few household items or appliances. You can save a lot of money on silverware, mini fridges, clothing and other items if you look for them at thrift stores or yard sales. Some things you may still want to buy new, such as towels or shower supplies, but furnishing your new college home costs a lot less when you’re willing to buying used items.

Cook Your Own Food

If you’re living in a dorm, you probably won’t save money cooking your own food, assuming you even have a place to do it. And even if cooking was somehow cheaper than a cafeteria meal plan, the cost savings probably won’t be worth the inconvenience of cooking between classes. But if you live in your own place, you can save a lot of money by cooking instead of ordering in or eating out. And to make the most of the time you spend cooking, prepare foods in bulk so you can have plenty of leftovers for meals later in the week.

You can raise a little extra money to pay for schooling by selling some personal items that you probably won’t be using in college. This is especially true if living in a dorm, where you’ll have less space to store stuff and where you can share certain items, like video game systems, kitchen appliances (like a minifridge or microwave) and televisions.

You’ll want to spend time with your family and friends before you leave. But that doesn’t mean you can’t work at least part-time making a few dollars flipping burgers, taking orders or working a cash register. A few thousand dollars from a summer job might pay for a semester of college or a few semesters’ worth of books.

Use Your Parents’ Insurance

College students should appreciate Obamacare (also known as the Affordable Care Act) because it allows them to stay on their parent’s health insurance through college. This can result in savings of thousands of dollars each year compared to buying insurance themselves.

Visit your nearest Title Tree store for more tips on spending less – or if you need a little help making ends meet right about now.